“From the moment I first faced footlights, as a little girl of five, and later, before the motion picture camera, I have had to use cosmetics. Naturally the discovery of pleasing, effective and beneficial beauty aids became a very practical necessity. Eventually, with the help of competent chemists, I developed my own beauty requisites.

These products have so satisfactorily met my exacting social and professional requirements that I have long thought that other women would appreciate their benefits. Careful tests have shown that, in large quantities, they can be produced at prices within the reach of every woman. So, I have formed my own company, offering to the women of America at extremely moderate prices, the identical beauty aids I personally use. As a matter of fact, when I had them made up just for my personal use, they cost me considerably more than prices at which I am offering them to you. To cite just three instances, the cleansing cream, the tissue cream, and the soap literally cost me four and five times the amount at which I am able to price them in quantity production.

I am enthusiastic about these preparations, and am sure that if you will try them, you will be as gratified with the results as I have been.” -Mary Pickford

Mary Pickford, who has done more for the movie business perhaps than any other one woman, decided in 1938 to do something also for the well-being of womankind in general, she intended to keep the ladies looking beautiful.  At this same time Constance Bennett launched a short-lived cosmetic venture and Sally Rand was in discussions but hers never took off.  Mary stated “I want to give beauty to the masses! Unless I can give the finest product, the purest ingredients to girls—every girl in every walk of life—I do not intend to go on with the work.  I must give them the best at a price they can afford to pay”.  “Cosmetics,” she says, “should be fun.  Lashes must be darkened with gaiety and lips moulded with joy.  So, if that isn’t the effect you get with your daily make-up, you aren’t approaching it in the right spirit—or you’re using the wrong cosmetics.”

Mary used the appeal of price, “romance” and quality when developing and marketing the cosmetic line. Campbell-Ewald Company of New York (the address for Mary Pickford Cosmetics, Inc was 580 Fifth Ave, New York) was used to handle advertising of the entire campaign, including radio.  Mary also utilized the writing services of Helen Underhill for the Mary Pickford Cosmetics, Inc.

Just a couple years prior, Mary had worked in radio with the CBS Radio show, “Parties at Pickfair.” She intended to do something similar in radio to market the cosmetic line to the public.  As early as October 1937, Mary was rumored returning to the air soon if a program being planned by Ruthrauff and Ryan is acceptable to her. She would head her own show plugging a line of Mary Pickford cosmetics.  By the early summer of 1939, the test run of radio series was to begin. Mary Pickford Cosmetics, Inc. was also sponsoring a two-month test campaign comprising of one-minute spot announcements about 6-9 times weekly.  These were occurring on WSYR, Syracuse; WMBG, Richmond; KRLD, Dallas; and WHN, New York.  Besides radio, Mary Pickford Cosmetics, Inc. had a magazine and newspaper ad campaign.

Mary Pickford’s preparations were beautifully packaged in Wedgewood blue and white and almost pleasingly priced at less than a dollar.  They were made available to local drug stores.

As it stated in the Mary Pickford Cosmetics, Inc. booklet:

“Mary Pickford’s basic beauty aids are all you need for a well-groomed, radiant complexion”

Cleansing cream, or cold cream, if you prefer, to wipe away the day’s grime and dirt…beauty soap for that fresh, bathed cleanliness…tissue cream to keep you skin moist and soft…skin freshener to give it a vibrant glow…face powder, rouge and lipstick, to add those important finishing touches for a well-groomed complexion.  You’ll find that every one of Mary Pickford’s Beauty Aids are all that she claims them to be.  Try them and see for yourself.

Rather than be the head of her own cosmetic line, she continued to endorse others trying to enter the beauty product world.  In 1941, for example, Mary was cited to be working with the laboratories of the Institute Devi Thomae in Ohio led by Dr. George Sperti and William A. Albers.  Mary Pickford said the scientist had discovered by accident, while looking for something else, a substance which causes the human cells to “breathe” oxygen. Rub it on your face and it freshens your skin.  Rub it on your scalp and it revives hair.  Rub it on your gums and it strengthens your teeth.  “I used to be in the cosmetic business,” she continued.  “Later I got out of it.”  I do not know whether you can call this new substance a cosmetic. It’s a by-product of yeast.  But I know it works.  I know the man who discovered it is a great scientist and I know that I will be doing a public good when I finance it for general retail sale.”  She added that the new cream—which isn’t a cream exactly—will go on sale in the next few weeks under her trademark.  Revenue from the product would go back to the institute for cancer research.  Mary’s final words on the product, “It is no cure-all. It won’t make old people young or ugly people beautiful.  But it will help them to retain healthy skin, hair and teeth.”  John A. Binford (Mary’s brother-in-law) was to be secretary of this new cosmetic company, a company that never did get launched. 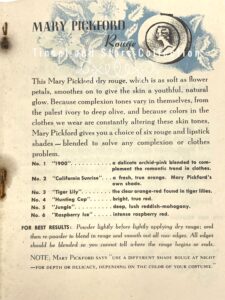 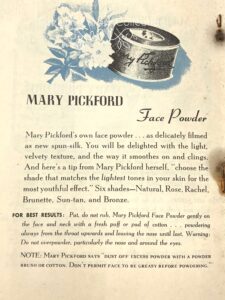 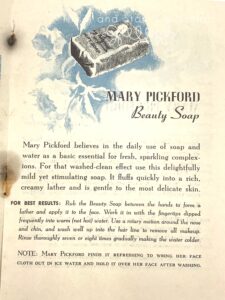 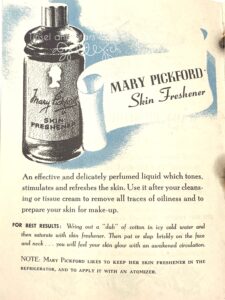 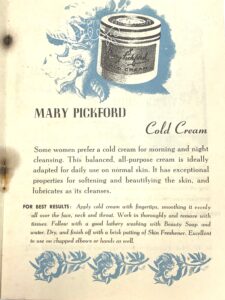 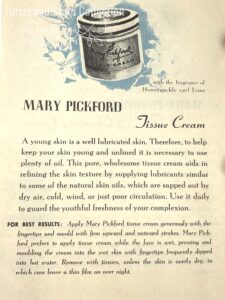 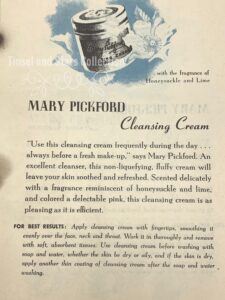