1923 Pompeian Calendar Panel from our collection

A common piece among collectors of early cinema is the yard-long calendars for Pompeian beauty products that Mary Pickford became the face of (they are still often found in an antique frame).  It was such a success; we were excited when we acquired one of Mary’s original contracts from this advertisement.

The celebrity power behind product branding and advertisement is not a new notion.  An article in the November 21, 1936 Motion Picture Herald said it best, “The talent is made up considerably more of fame than skill, more of personality than performance. It is for sale and the highest bidder gets it. The human reaction, and the trade reaction in a large way in all industries, is the immediate now.  The hot heads, not the long heads, run the world.”

The merchandise of fame dates back to the medicine shows and theatre when the likes of Lillian Russell and Anna Held became the face behind cigarettes and other lovely ladies were helping give away merchandise from vitamins to dishes.  But before Disney ruled the merchandising market, none had greater buying power than Mary Pickford and Charlie Chaplin (Chaplin was on everything from candy boxes to radiator caps).

This was a perfect partnership as having a strict beauty regimen was important to Mary Pickford. Fellow theatrical actress, Rose Tapley once said of Pickford, “I have known Mary Pickford ever since she was a very little girl; in fact, at one time she played in the same company with me, and I often envied her peculiarly fresh complexion, as delicate as a tea-rose. Recently I met her at one of the movie expositions and asked her how she managed to preserve her skin as against the wear and tear of constant exposure to the sun, fogs, salt air, and the incessant use of make-up.  Little Mary told me that she used Pompeian cream or some other equally reliable emollient as religiously as she said her prayers, and that she believed they offset the ravages of alkali dust, wind and weather.”  Mary also revealed in her autobiography, Sunshine and Shadow, that as a young girl living in Toronto, she would buy a single rose and eat the petals, believing the beauty, color and perfume would somehow get inside her.

Mary Pickford did a total of (3) yard-long calendars for The Pompeian Manufacturing Co.  The years included:  1917 (photo of Mary with a bird perched on her finger), 1918 (Mary standing holding flowers) and 1923 (Mary sitting plucking the petals).

For the 1917 calendar, Pompeian advertised the process behind the development of these calendars. They stated that Mary Pickford posed 70 times to produce the “most expensive” picture.  They hired Fifth Avenue photographer, Ira Hill for the photoshoot.  The artist that did the color work was Moschcowitz and for the lithograph printed engravings, they utilized Forbes of Boston.

The Memorandum of Agreement we acquired between Mary Pickford Fairbanks and The Pompeian Manufacturing Co. was signed on February 16, 1922 for the upcoming 1923 calendar. The agreement was executed by Dennis F. O’Brien (Mary and Doug’s NYC lawyer) through the O’Brien, Malevinsky & Driscoll Law Offices.  The logo of the law offices is often seen in most of Mary and Doug’s legal affairs.

The Memorandum of Agreement stated the desire of Pompeian with:

“Whereas, Miss Pickford is and has been well and favorably known for many years under her professional and stage name of Mary Pickford to the public of the United States of America and the Dominion of Canada, and other parts of the world, as an actress of exceptional ability, and particularly in the motion picture branch of the theatrical profession, and has been extensively advertised as such in the aforesaid territory, and her photograph and name are widely and favorable known to the patrons of motion picture entertainments in all parts of the aforesaid territory.

Whereas, the said corporation desires to benefit by the well-established popularity and reputation of said Miss Pickford, and the value of her photograph for advertising purposes, as hereinafter set forth, and is desirous of entering into a contract with said Miss Pickford for the said purpose, subject to the terms, conditions and provisions herein contained….”

In summary, Mary gave the license to use her name and photograph upon art panel, panels and art pictures.  The purpose of the advertising was for the sale of Pompeian’s toilet articles that included:

Mary’s compensation for the advertisements and calendar panels was the following:

Pompeian planned to make approximately 1,000,000 or more calendars for the year of 1923.  This explains why they still frequently come available today for purchase at antique stores and online auction sites.

Here is a sneak peak into the Memorandum of Agreement for the 1923 advertising campaign: 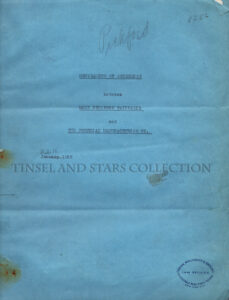 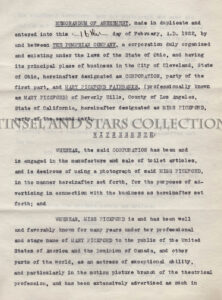 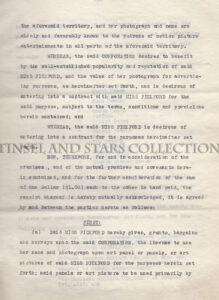 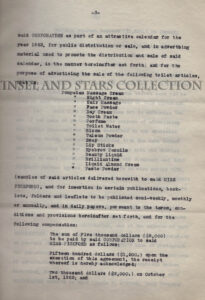 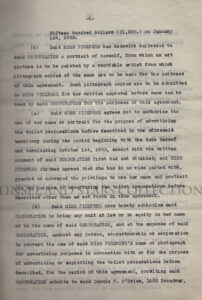 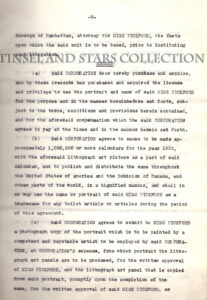 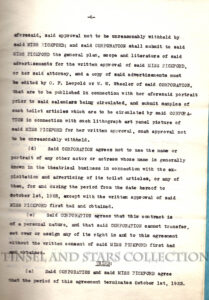 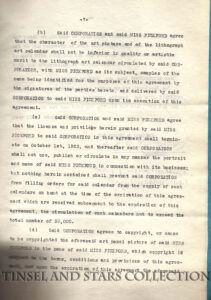 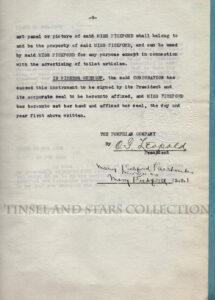 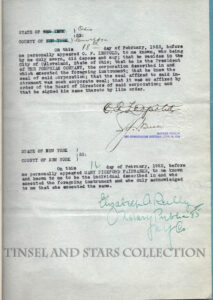