Mary Pickford died on May 29, 1979 many years after her parents and siblings had deceased. Much like the remaining years of her life, her memorial was very private. Mary was interred in the family plot in the Garden of Memory at Forest Lawn Memorial Park in Glendale, California.  Though a key is required to enter the garden, fans of the Pickford family are drawn to the images of the beautiful sarcophagus and the history that is interred in it.

The History of the Pickford Family Plot

The beautiful garden plot was not the first area where the Pickford family was interred.  When Charlotte (mother of Mary, Lottie and Jack) passed away in 1928 to breast cancer, five crypts were purchased in the Great Mausoleum (Dahlia Corridor location) by Mary Pickford Fairbanks.  In 1931, Finley Benson (he married Mary’s cousin Mabel) died and was interred in one of the family crypts right below Charlotte. Jack Pickford (Mary’s brother) would soon take another crypt in 1933.  Mary’s aunt (mother to Mabel and Verna) was interred in 1935 and then lastly, Lottie (Mary’s sister) in 1936.

Mary had flowers placed twice a week on the crypts of Charlotte, Jack and Lottie. 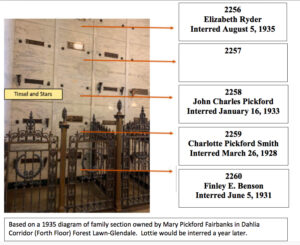 By 1940, Mary knew that since the Pickford section was being offered to extended family and friends, a larger plot was needed.  With thanks to the Margaret Herrick Library in the Pickford special collection, correspondence between Mary and Forest Lawn still exists.  At the time, Forest Lawn offered Mary two options.  First option, to acquire a family room within the Great Mausoleum just a few steps from their current location.  This, at first, was the best option because Mary was very reluctant to move her already interred family.  This way, the room would be in view of her other memorials.  The room offered 8 more interments, 6 of which were couch crypts and the other two crypts were located under the floor.  The room was adorned by one of the most beautiful stained-glass windows in Forest Lawn, “The Good Shepherd” by Italian artist Antonco Besesti.  In 1940, the room was offered for $27,500.  The second option, a garden plot with a statue in the Sweet Memories section. 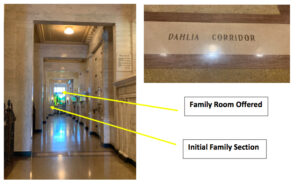 In 1947, Forest Lawn reached out to Mary again informing her that the new Gardens of Memory was being made available.  Even at that time, these gardens had all the privacy and permanence as the Mausoleum did. Mary was still busy and in New York at the time to think of making any changes to the family plot.

When Mary’s cousin Verna Chalif died in 1948, Mary purchased the Gardens of Memory plot, where Verna was interred and then the rest of the family was moved (but first a telegram was sent to Lottie’s daughter Gwynne in Italy for permission to change Lottie’s location).  The garden, crypt removals and a sarcophagus had a total cost of $48,222.50. 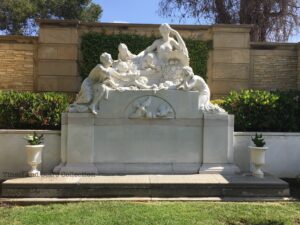 Very little in the Forest Lawn correspondents discuss the history of the sarcophagus in the Pickford plot.  However, in a 1944 Forest Lawn souvenir book, I was able to find a little more information. The sarcophagus was originally located just outside of the Great Mausoleum where Jean Hersholt’s sarcophagus is now.  The Pickford sarcophagus is called “Motherhood”.  Forest Lawn’s description of the sculpture states, “The boundless power of God to create life and to sustain life throughout eternity is nowhere more forcibly expressed at Forest Lawn than in “Motherhood,” a famous original sculpture by Silvo Silva. Into this group has been carved a powerful message of immortality.  It depicts Motherhood as the eternal fountain from which all earthly existence flows—trees, flowers, birds, creatures of the field and Man created in the likeness of God. The tipped shell, spilling forth its bounty, symbolizes not only the unselfish love of a Mother for her children, but also the infinite love of the Great Creator for all mankind.”

Forest Lawn founder, Dr. Hubert Eaton, personally communicated with Mary and Buddy Rogers on the landscape architecture and look.  In 1965, there were issues with the yew trees dying or not staying healthy (even today when you see the trees around the plot—especially behind the fence, they are not healthy).  Dr. Eaton went as far to have new soil placed. Buddy also had concerns that the names engraved in the white marble were difficult to read.  While they worked with Buddy on solutions by adding gold inlay and other options, the engravements stayed the same.  On Mary’s birthday in 1969, she had 2 marble urns placed on both ends of the sarcophagus.  These urns are 9” deep and 4 ½ - 5 ½” wide and can hold 1 ½ dozen roses with stem lengths of 14-16”.  Mary had previously discontinued her twice a week flower placement when purchasing the garden plot. 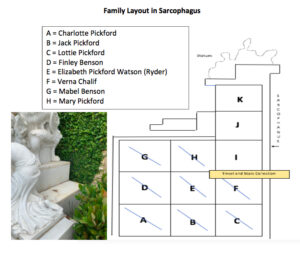 Mary’s cousin Mabel was interred in the sarcophagus in 1953.  Mary’s friends, Ivan Lebedeff (1953) and Wera Lebedeff (1988) were buried in the grass plot next to an assistant of Mary’s, Agda Erickson (1963).  There was even discussion that when Ford Sterling’s widow was dying that possibly she could be buried in the Pickford plot since there was space, however, she ended up buried elsewhere.  Buddy Rogers was not interred in the sarcophagus, even though there was a crypt for him, but rather he was interred with his last wife in Forest Lawn Memorial Park—Cathedral City, California. 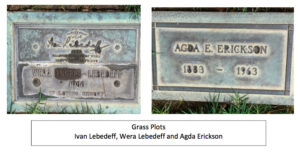 The Memorial of “America’s Sweetheart”

Mary Pickford’s memorial was May 31, 1979 at the Wee Kirk o’ the Heather church at Forest Lawn.  It was a very private funeral which had been requested by the star who was once the most famous in the world.  Just prior to her memorial on the same day, Mary was cremated at Live Oak Crematorium in Monrovia, California (as stated on her death certificate).  Gates, Kingsley and Gates were listed on her death certificate as the funeral directors.

The service was conducted by Dr. William H. D. Hornaday of Founders United Church of Religious Science in Los Angeles.  Mary had an Honor Guard by the Naval Sea Cadets.  The organist was Dr. R. Donald Curry and played “Mary”, “My Buddy”, “Let Me Call You Sweetheart” and “Unforgettable” along with a violin solo by Rima Rudina.

The eulogy was given by Mary’s cousin, John Mantley.  We are very fortunate to have his eulogy in our collection and hope one day to read it at a special Mary Pickford event or memorial.

2 thoughts on “The End of The Pickford Family Legacy”